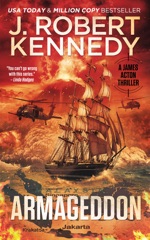 *** FROM USA TODAY & MILLION COPY BESTSELLING AUTHOR J. ROBERT KENNEDY ***
IN 1883, A MASSIVE ERUPTION CONVINCES SOME IT’S THE END OF THE WORLD.
AND TODAY, ANOTHER LEADS TO A DESPERATE STRUGGLE TO SAVE AN ISOLATED CIVILIZATION.
Archaeology Professors James Acton and Laura Palmer are fleeing for their lives, pursued by criminals hellbent on possessing a valuable find, when an eruption the likes of which hasn’t been seen in over a century overwhelms both the professors and their pursuers.
The Actons find themselves marooned on a forbidden island, populated by an uncontacted tribe known for their violent reaction to any intruders, leaving the survivors fleeing another foe.
But when this isolated tribe comes under attack itself, the professors are left with an impossible choice.
Save themselves while they await rescue, letting these ancient peoples die, or risk death by revealing themselves and intervening.
In Armageddon, award winning and USA Today bestselling author J. Robert Kennedy once again mixes history and the problems of today in a riveting survival story sure to keep you on the edge of your seat. If you enjoy fast-paced adventures in the style of Dan Brown, Clive Cussler, and James Rollins, then you’ll love this thrilling tale of archaeological intrigue.
Get your copy of Armageddon now, and discover what happens when the present threatens to overwhelm the past, forcing the best, and worst, of humanity to the surface.
About the James Acton Thrillers:
★★★★★ "James Acton: A little bit of Jack Bauer and Indiana Jones!"
Though this book is part of the James Acton Thrillers series, it is written as a standalone novel and can be enjoyed without having read any of the previous installments.
★★★★★ “Non-stop action that is impossible to put down.”
The James Acton Thrillers series and its spin-offs, the Special Agent Dylan Kane Thrillers and the Delta Force Unleashed Thrillers, have sold over one million copies. If you love non-stop action and intrigue with a healthy dose of humor, try James Acton today!
★★★★★ “A great blend of history and current headlines.”
About J. Robert Kennedy:
With over one million books sold, award winning and USA Today bestselling author J. Robert Kennedy has been ranked by Amazon as the #1 Bestselling Action Adventure novelist based upon combined sales. He is a full-time writer and the author of over forty international bestsellers including the smash hit James Acton Thrillers. He’s married, has an adult daughter, and is likely hard at work on his next book.

No rating
No Entry

© 2022 Chartoo. Available on iTunes. Product prices and availability are accurate as of 8/14/2022, 6:24:19 AM and are subject to change. Any price and availability information displayed on iTunes at the time of purchase will apply to the purchase of this product. Apple, the Apple logo, Apple Music, iPad, iPhone, iPod, iPod touch, iTunes, iTunes Store, iTunes U, Mac, and OS X are trademarks of Apple Inc., registered in the U.S. and other countries. Apple Books, App Store, and Mac App Store are service marks of Apple Inc. IOS is a trademark or registered trademark of Cisco in the U.S. and other countries and is used under license. QR Code is a registered trademark of Denso Wave Incorporated. All other trademarks, logos, and copyrights are property of their respective owners.
DesktopTabletMobile
Preview provided courtesy of iTunes
Preview provided courtesy of iTunes